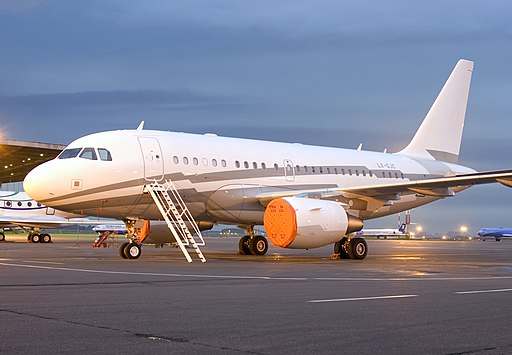 The Airbus A318 Elite is a medium-range, narrow-body, corporate twin-engine jet manufactured by Airbus. The A318 Elite provides a lounge, dining area and a private office which converts to a bedroom and bathrooms. Seating up to 18 passengers, it has the range for a transatlantic flight, as well as intercontinental.

On 10 November 2005 Airbus announced the A318 Elite. The Airbus A318 Elite is aimed at the medium-range market for flights of up to 4,000-nautical-mile (7,400 km) range, with a choice of two cabin layouts seating up to 18 passengers, and powered by CFM engines.

In September 2010, Airbus confirmed that from 2013 the Airbus A318 would become available with Sharklets, wing tip devices which reduce lift-induced drag and improve efficiency through reduced fuel consumption.The optional devices, which will also be available on other Airbus A320 family models and are manufactured by Korean Air Aerospace Division, will increase the range of the aircraft to 5,930 kilometres (3,200 nmi) – an increase of 185 kilometres (100 nmi) over a standard A318 with 107 seats in a two-class configuration.

The aircraft shares a common type rating with all other Airbus A320 family variants, allowing existing A320 family pilots to fly the aircraft without the need for further training. It is the largest commercial aircraft certified by the European Aviation Safety Agency for steep approach operations, allowing flights at airports such as London City.

The A318 entered service in July 2003. Relative to other Airbus A320 family variants, it has sold in only small numbers with total orders for 80 aircraft placed.

The A318 leads the way in single-aisle comfort and even as the family member with the shortest fuselage, the A318 still offers the industry’s best level of comfort in all classes.

With the widest single-aisle cabin available, passengers can enjoy more personal space and relax in comfortable 18-inch-wide seats. The A318 also has plenty of overhead locker space so that carry-on luggage can be stored efficiently, while the wider aisle helps with boarding and disembarking. These advantages allow for minimum fuss when getting on or off, meaning less wait time at the end of a flight so that passengers can get to where they’re going more quickly.

The A318’s cabin is flexible enough to deliver a range of options, allowing it to fulfil several roles. As the largest commercial aircraft certified to land at steeper-than-usual gradients, it is ideal for operations at such constrained locations as downtown airports – translating to significant cost and time savings for business travellers. Since 2009, A318’s have been operating with “steep approach” capability from the in-close London City Airport to New York’s JFK International Airport.

Aircraft of similar configuration and capabilities are: Boeing BBJ