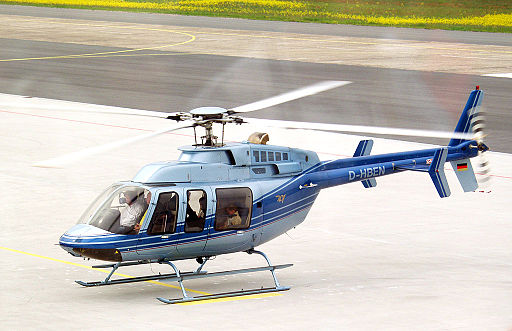 The Bell 407 helicopter is a four-blade, single-engine, civil utility helicopter. The Bell 407 is capable of transporting for up to 6 passengers.

In 1993, Bell began the development of the New Light Aircraft as a replacement for its Model 206 series. The program resulted in the 407, a development of Bell’s Long Ranger. A 206L-3 Long Ranger was modified to serve as the 407 demonstrator. The demonstrator used hardware for the 407 and added molded fairings to represent the 407’s wider fuselage then under development.

The 407’s airframe is generally similar to the Long Ranger, but includes a carbon fiber composite tailboom. The helicopter has standard seating for two crew and five cabin seats.[6]

In 1995, Bell tested a shrouded tail rotor on the 407, but did not proceed with it. For a time, Bell studied developing the Model 407T twin-engine variant, but instead chose to develop the essentially all-new twin-PW206D powered Bell 427.