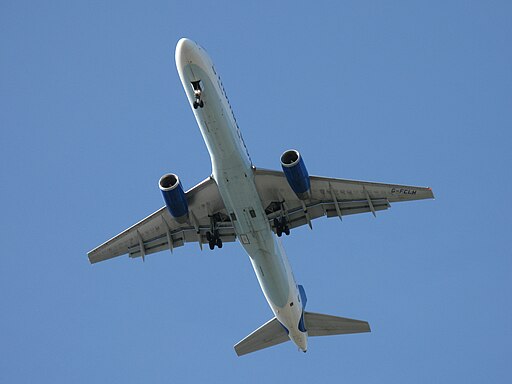 The Boeing 757-200 is a mid-size, narrow-body twin-engine jet airliner that was designed and built by Boeing Commercial Airplanes. The aircraft is capable of transporting up to 228 passengers.

The 757-200, the original version of the aircraft, entered service in 1983. The type was produced with two different door configurations, both with three standard cabin doors per side: the baseline version has a fourth, smaller cabin door on each side aft of the wings, and is certified for a maximum capacity of 239, while the alternate version has a pair of over-the-wing emergency exits on each side, and can seat a maximum of 224.

Although designed for short and medium length routes, the 757-200 has since been used in a variety of roles ranging from high-frequency shuttle services to transatlantic routes. In 1992, after gaining ETOPS approval, American Trans Air launched 757-200 transpacific services between Tucson and Honolulu. Since the turn of the century, mainline U.S. carriers have increasingly deployed the type on transatlantic routes to Europe, and particularly to smaller cities where passenger volumes are insufficient for wide-body aircraft.

Production of the 757 ended in October 2004, after 1,050 had been built for 54 customers. The 757-200 was by far the most popular model, with 913 built. Diminished sales amid an airline industry trend toward smaller jetliners led Boeing to end production without a direct replacement, in favor of the 737 family. The last 757 was delivered in November 2005. In July 2017, 666 of the narrow-body twinjets were in airline service.