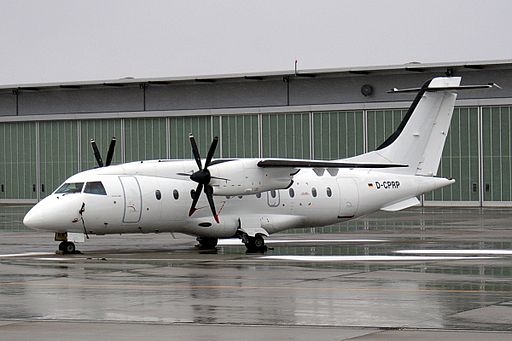 Dornier D328 is a twin-turboprop STOL utility aircraft, manufactured by Dornier GmbH. The aircraft is capable of transporting up to 33 passengers.

The Dornier 328 (or Do 328) program was initially started while Dornier was still owned by Deutsche Aerospace, and around 1984 feedback from airlines indicated a desire for a fast, quiet, and easy-to-maintain commuter airliner with a 30-seat capacity. This market research reportedly led Deutsche Aerospace to formulate a sales prediction of 400 or greater units being purchased overall; this forecast was in part derived from the reasoning that the 328 would be more advanced than its nearest competitors.

Favourable features included a high cruising speed of 345 kt (640 km/h), as well as a higher cruising altitude and range, making the aircraft almost as fast as jet airliners while being more fuel-efficient; a trend away from spoke–and-hub distribution in favour of point-to-point transit was also viewed as being favourable to the 328.

In December 1988, the 328 project was relaunched following the granting of shareholder approval after negotiations between the Dornier family and Daimler Benz.

On 13 October 1993, the 328 formally entered commercial service. The 328 was launched into the market during a period of large numbers of competing turboprop aircraft, as well as increasing competition from newly launched regional jets, which were becoming increasingly popular during the early 1990s. The 328 had the advantages of being both quieter and faster than many of its rivals, but this did not ensure its commercial success.

The fuselage of 328 allows for a comfortable three-abreast, airline-style seating arrangement to be used, as well as a dense, four-abreast configuration to accommodate greater passenger numbers, of which it is able to carry a maximum of 27. A total of six cabin configurations is available for passenger and cargo operations; these include a flexible combi aircraft layout with a movable wall separating passengers and cargo, and a medical evacuation arrangement equipped with biofloors and positions for four litters and medical attendees. The 328 is pressurized, a first for Dornier-built aircraft, which was implemented to achieve a higher level of passenger comfort; the passenger cabin is designed to be more akin to those of much larger passenger aircraft. A full-sized galley, toilet, and washbasin can also be installed.

The latter half of the 328 program took place during a recession, which curtailed demand for new aircraft from operators. Both the 328 and the wider Dornier division of Deutsche Aerospace proved to be losing money; accordingly, Deutsche Aerospace wavered in committing more resources to the regional aircraft market, repeatedly delaying a decision to proceed with a 48-seat stretched model of the 328, which had originally been unveiled in 1991.