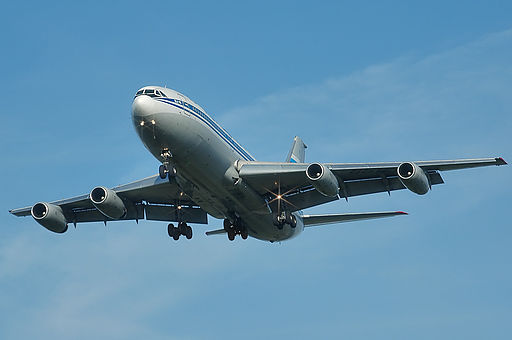 The Ilyushin IL-86 96a short/medium-range wide-body jet airliner. The aircraft is capable of transporting up to 436 passengers.

It was the USSR’s first wide-body and the world’s second four-engined wide-body. Designed and tested by the Ilyushin design bureau in the 1970s, it was certified by the Soviet aircraft industry, manufactured and marketed by the USSR.

In the mid-1960s, the United States and Western Europe planned airliners seating twice the then-maximum of some 200 passengers. They were known as airbuses at the time. The Soviet leadership wanted to match them with an aerobus. Alongside the propaganda motive, the USSR genuinely needed an aerobus. Aeroflot expected over 100 million passengers a year within a decade (the 100th million annual passenger was indeed carried on 29 December 1976.

Developed during the Leonid Brezhnev era, which was marked by stagnation in many sectors of Soviet industry, the Il-86 used engines more typical of the 1960s, spent a decade in development, and failed to enter service in time for the Moscow Olympics, as was originally intended. The type was used by Aeroflot and successor post-Soviet airlines and only three of the total 106 examples were exported. In service, it gained recognition as a safe and reliable model with no fatal incidents during three decades of passenger-carrying operations.

At the beginning of 2012, only four Il-86s remained in service, all with the Russian Air Force.