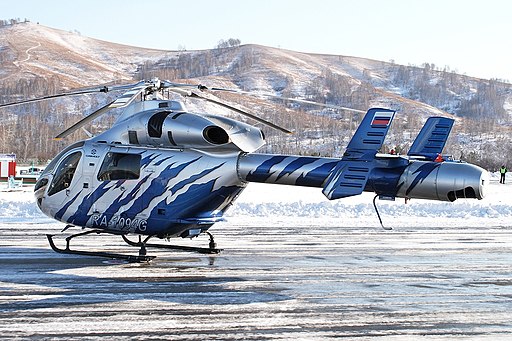 The MD Helicopters MD 500 series is an American family of light utility civilian and military helicopters. The aircraft is capable of transporting up to 4 passengers.

The successful Hughes 500/MD 500 series began life in response to a U.S. Army requirement for a Light Observation Helicopter (LOH). Hughes’ Model 369 won the contest against competition from Bell and Hiller. The subsequent OH-6 Cayuse first flew in February 1963.

The 500 series design features shock-absorbing landing skid struts, a turboshaft engine mounted at a 45-degree angle toward the rear of the cabin pod, a fuel tank cell under the floor and the battery in the nose.

Prior to the OH-6’s first flight, Hughes announced it was developing a civil version, to be marketed as the Hughes 500, available in basic five- and seven-seat configurations. A utility version with a more powerful engine was offered as the 500U (later called the 500C).

The improved Hughes 500D became the primary model in 1976, with a more powerful engine, a T-tail, and a new five-blade main rotor; a four-blade tail rotor was optional. The 500D was replaced by the 500E from 1982 with a pointed nose and various interior improvements, such as greater head- and legroom. The 530F was a more powerful version of the 500E optimized for hot and high work.