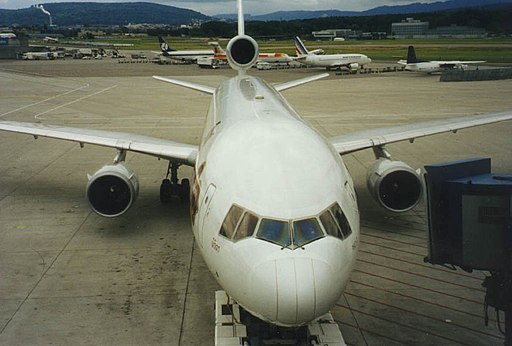 The McDonnell Douglas MD-11 DC10 is a three-engine medium- to long-range wide-body jet airliner, manufactured by McDonnell Douglas. The aircraft is capable of transporting up to 410 passengers.

The McDonnell Douglas MD-11 is an American three-engine medium- to long-range wide-body jet airliner, manufactured by McDonnell Douglas and, later, by Boeing Commercial Airplanes. Based on the DC-10, it features a stretched fuselage, increased wingspan with winglets, refined airfoils on the wing and smaller tailplane, new engines and increased use of composite materials. Two of its engines are mounted on underwing pylons and a third engine at the base of the vertical stabilizer. It also features a glass cockpit that decreases the flight deck crew to two from the three required on the DC-10 by eliminating the need for a flight engineer.

Although the MD-11 program was launched in 1986, McDonnell Douglas started to search for a DC-10 derivative as early as 1976. Two versions were considered then: a DC-10-10 with a fuselage stretch of 40 feet (12 m) and a DC-10-30 stretched by 30 feet (9.1 m). That later version would have been capable of transporting up to 340 passengers in a multi-class configuration, or 277 passengers and their luggage over 5,300 nautical miles (9,800 km). At the same time, the manufacturer was seeking to reduce wing and engine drag on the trijet. Another version of the aircraft was also envisaged, the “DC-10 global”, aimed to counter the risks of loss of orders for the DC-10-30 that the Boeing 747SP and its range were creating. The DC-10 global would have incorporated more fuel tanks.

While continuing their research for a new aircraft, McDonnell Douglas designated the program DC-10 Super 60, previously known for a short time as DC-10 Super 50. The Super 60 was to be an intercontinental aircraft incorporating many aerodynamic improvements in the wings, and a fuselage lengthened by 26 feet 8 inches (8.13 m) to allow for up to 350 passengers to be seated in a mixed-class layout, compared to 275 in the same configuration of the DC-10.

Following more refinements, in 1979 the DC-10 Super 60 was proposed in three distinct versions like the DC-8. The DC-10-61 was designed to be a high-capacity medium-range aircraft. It would have a fuselage stretch of 40 feet (12 m) over the earlier DC-10 models, enabling it to carry 390 passengers in a mixed class or 550 passengers in an all-economy layout, similar to Boeing’s later 777-300 and Airbus A340-600. Like the DC-8, the series 62 was proposed for long-range routes. It would feature a more modest fuselage stretch of 26 ft 7 in (8.10 m), along with an increased wingspan and fuel capacity. It would be capable of carrying up to 350 passengers (mixed class) or 440 passengers (all-economy), similar to the later Boeing 777-200 or the Airbus A330-300/A340-300/500. Finally, the series 63 would have incorporated the same fuselage as the DC-10-61 as well as all the larger wing of the -62. After high-profile accidents in the 1970s, such as Turkish Airlines Flight 981 and American Airlines Flight 191, the trijet’s reputation was seriously damaged by doubts regarding its structural integrity. For these reasons, and due to a downturn in the airline industry, all work on the Super 60 was stopped.

In 1981, a Continental DC-10-10 (registration number N68048) was leased to conduct more research, particularly the effects the newly designed winglets would have on aircraft performance. Different types of winglets were tested during that time in conjunction with NASA. McDonnell Douglas was again planning new DC-10 versions that could incorporate winglets and more efficient engines developed at the time by Pratt & Whitney (PW2037) and Rolls-Royce (RB.211-535F4). The manufacturer finally rationalized all these studies under the MD-EEE (Ecology-Economy-Efficiency) designation, that was later modified to the MD-100 following some more changes. The MD-100 was proposed in two versions: the Series 10, having an airframe shorter by 6 ft 6 in (1.98 m) compared to the DC-10 and seating up to 270 passengers in a mixed-class configuration; and the Series 20, incorporating a fuselage stretch of 20 ft 6 in (6.25 m) over the DC-10 and able to seat up to 333 passengers in the same kind of configuration as the Series 10. Both versions could be powered by the same engine families as the actual MD-11 plus the RB.211-600. However, the situation for the manufacturer, and the airline industry in general, did not look bright. No new DC-10 orders were received, and many among the observers and customers doubted that the manufacturer would stay in business much longer. Thus, the Board of Directors decided in November 1983 to once again cease all work on the projected new trijet.[5]

The following year no new orders for the DC-10 were received. The production line was kept active thanks to earlier orders from the United States Air Force for 60 KC-10A tankers. McDonnell Douglas was still convinced that a new derivative for the DC-10 was needed, as shown by the second-hand market for their Series 30 and the heavier DC-10-30ER version. Thus, in 1984 a new derivative aircraft version of the DC-10 was designated MD-11. From the very beginning, the MD-11X was conceived in two different versions. The MD-11X-10, based on a DC-10-30 airframe, offered a range of 6,500 nautical miles (12,000 km) with passengers. That first version would have had a maximum takeoff weight (MTOW) of 580,000 pounds (260,000 kg) and would have used CF6-80C2 or PW4000 engines. The MD-11X-20 was to have a longer fuselage, accommodating up to 331 passengers in a mixed-class layout, and a range of 6,000 nautical miles (11,000 km).[5]

As more orders for the DC-10 were received, McDonnell Douglas used the time gained before the end of DC-10 production to consult with potential customers and to refine the proposed new trijet. In July 1985, the Board of Directors authorized the Long Beach plant to offer the MD-11 to potential customers. At the time, the aircraft was still proposed in two versions, both with the same fuselage length, a stretch of 22 ft 3 in (6.78 m) over the DC-10 airframe, as well as the same engine choice as the MD-11X. One version would have a range of 4,780 nautical miles (8,850 km) with a gross weight of 500,000 pounds (230,000 kg) and transport up to 337 passengers, while the second would carry 331 passengers over 6,900 nautical miles (12,800 km). A year later, as several airlines had committed to the MD-11, the situation was looking optimistic. The aircraft was now a 320-seater baseline and defined as an 18 ft 7 in (5.66 m) stretch over the DC-10-30 powered by the new advanced turbofans offered by the major engine manufacturers and giving it a range of 6,800 nautical miles (12,600 km). Other versions, such as a shortened ER with a range of 7,500 nautical miles (13,900 km), an all-cargo offering a maximum payload of 200,970 pounds (91,160 kg) and a Combi with a provision for ten freight pallets on the main deck, were proposed. Further growth of the aircraft was also foreseen, such as the MD-11 Advanced.

The lack of innovation from McDonnell Douglas during the MD-11’s design had been attributed to the company’s declining cash flow, as it struggled with problems with its military contracts and declining orders for its commercial jets. Limited company resources resulting in the MD-11 being developed as a refinement of the existing DC-10, in contrast to rivals Airbus and Boeing who during this time period developed all-new aircraft designs that would become the Airbus A330/A340 and Boeing 777. As a trijet the MD-11 was less fuel-efficient but had a greater range than its mid-size widebody contemporaries which were twinjets (the existing Boeing 767 and upcoming Airbus A330). Aerospace consultant Scott Hamilton, in a 2014 article, said that the MD-11 was “classically ill-timed” as “it came at the end of the three- or four-engine era, just ahead of the real move to ETOPS with the 777”.

Aircraft of similar role, configuration and era are: Airbus A340, Boeing 777, Ilyushin Il-96.