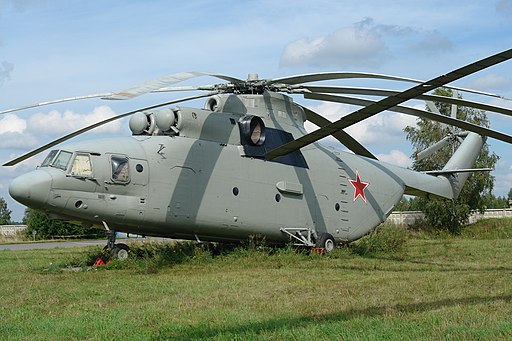 The Mil MI-26 is a medium range helicopter capable of transporting 20,000 kg in its main cargo compartment. Cargo loaded with forlift or by hand.

Following the incomplete development of the heavier Mil Mi-12 (prototypes known as Mil V-12) in the early 1970s, work began on a new heavy-lift helicopter, designated as the Izdeliye 90 (“Project 90”)[4] and later allocated designation Mi-26.

The new design was required to have an empty weight less than half its maximum takeoff weight.

The Mi-26 was designed to replace earlier Mi-6 and Mi-12 heavy lift helicopters and act as a heavy-lift helicopter for military and civil use, having twice the cabin space and payload of the Mi-6, then the world’s largest and fastest production helicopter. The primary purpose of the Mi-26 was to transport military equipment such as 13-metric-ton (13,000 kg; 29,000 lb) amphibious armored personnel carriers and mobile ballistic missiles to remote locations after delivery by military transport aircraft such as the Antonov An-22 or Ilyushin Il-76.

The Mi-26 was the first factory-equipped helicopter with a single, eight-blade main lift rotor. It is capable of flight in the event of power loss by one engine (depending on aircraft mission weight) because of an engine load sharing system. It is the second largest and heaviest helicopter ever constructed, after the experimental Mil V-12. The tail rotor has about the same diameter and thrust as the four-bladed main rotor fitted to the MD Helicopters MD 500.