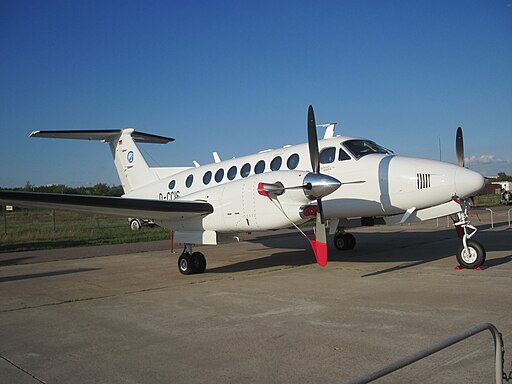 The Beechcraft King Air family is part of a line of American utility aircraft produced by Beechcraft. The King Air line comprises a number of twin-turboprop models that have been divided into two families. The Model 90 and 100 series developed in the 1960s are known as King Airs, while the later T-tail Model 200 and 300 series were originally marketed as Super King Airs, with the name “Super” being dropped by Beechcraft in 1996 (although it is still often used to differentiate the 200 and 300 series King Airs from their smaller stablemates).

The King Air was the first aircraft in its class and has been in continuous production since 1964. It has outsold all of its turboprop competitors combined.

The 200 series proved so popular that Beechcraft began work on a successor, with the Beechcraft designation Model 300 and marketed as the “Super King Air 300”. The B200’s airframe was “cleaned up” and even more powerful engines installed in redesigned cowlings with MTOW increased to 14,000 lb (6,300 kg). A Model 200 (c/no. BB-343) was modified to develop the updated systems to be used on the new model and flew in this configuration on October 6, 1981. The first flight of the prototype Model 300 took place on September 3, 1983 and deliveries commenced the following year.

Because not all nations would then allow an aircraft of this type to be certified at an MTOW greater than 12,500 lb (5,700 kg), the Model 300LW was also developed at the same time, limited to the lower MTOW. Nineteen examples of a special version of the Model 300 were delivered to the FAA in 1987 and 1988.

By 1988, Beechcraft had begun work on the replacement for the 300. The fuselage of the 300 was stretched by nearly three feet with two extra cabin windows on each side and winglets added to the wingtips to create the Model B300, introduced in 1990 and initially marketed as the Super King Air 350. MTOW was increased again to 15,000 lb (6,750 kg); as the same regulatory situation that led to the development of the 300LW still existed, that model continued to be produced until 1994. Like the 200 and B200 before it, a version with a large cargo door was developed, the Model B300C marketed as the “Super King Air 350C”. The first deliveries of this model also took place in 1990. In 1998, the UltraQuiet active noise canceling system, made by Elliott Aviation, was added as standard equipment on all B300s.

The B300 model is still in production today (now marketed simply as the “King Air 350”, the “Super” being dropped in 1996 as mentioned earlier).

In October 2008, Beechcraft announced updated versions of the B300 series, the King Air 350i, with improvements to the passenger cabin. The manufacturer claims that the noise level and overall comfort of the King Air 350i, 350iER, 350iC and 350iCER are now competitive with those of light jets. The cabin of the B300 series has been updated with controllers in the passenger seat armrests that dim the LED lights, darken the windows and control an iPod dock and a high-definition video monitor. The cabin also includes Universal Serial Bus (USB) ports, AC electrical receptacles and fold-out tables for each passenger in the eight seats fitted. Deliveries commenced in December 2009.