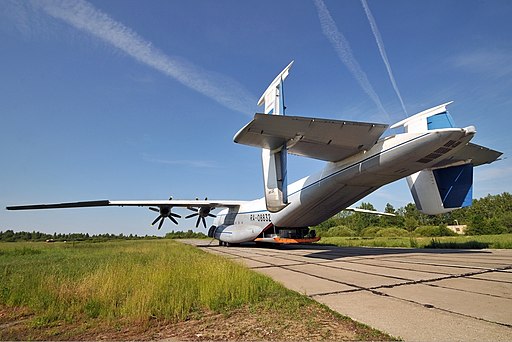 The Antonov An-22 “Antel” is a wide-body quad-engine medium-to-long range cargo aircraft capable of transporting 80,000 kg of mixed freight. Antonov An-22 has a rear loading ramp.

The upper deck behind the cockpit is fully pressurized and provides space for 5 to 8 crew and up to 28 passengers. The unpressurised lower deck can house a range of oversize payloads.

Antonov An-22 was designed as a strategic airlifter, that has the capability to takeoff from austere, unpaved, and short airstrips. The landing gear is ruggedized for rough airstrips.

In the late 1950s, the Soviet Union required a large military transport aircraft to supplement the Antonov An-8 and An-12s then entering service. Originally known as the An-20, the model is a conventional multi-engined high-wing design. In the early 1960s, the Antonov bureau produced a wooden mock up at its Kiev, Ukraine, workshops of what was designated the Model 100. The prototype, now designated the An-22, was rolled out on 18 August 1964 and first flew on 27 February 1965. The prototype was given the name Antheus and, after four-months of test flying, was displayed at the 1965 Paris Air Show. All aircraft were built at the Tashkent State Aircraft Factory and the first military delivery was made to the Air Transport Wing at Ivanovo Airbase in 1969.

The aircraft was designed as a strategic airlifter, designed specifically to expand the Soviet Airborne Troops’ capability to land with their then-new BMD-1 armoured vehicles. The An-22 cargo hold can accommodate four BMD-1 compared to only one in the An-12.

It also has the capability to takeoff from austere, unpaved, and short airstrips, allowing airborne troops to perform air-landing operations. This is achieved by four pairs of contra-rotating propellers, similar to those on the Tupolev Tu-114. The propellers and the exhaust from the engines produce a slipstream over the wings and large double-slotted flaps. The landing gear is ruggedized for rough airstrips, and, in early versions, tire pressures could be adjusted in flight for optimum landing performance, although that feature was removed in later models.

The An-22 follows traditional cargo transport design with a high-mounted wing allowing a large cargo space of 33m in length and a usable volume of 639m³. The forward fuselage is fully pressurized and provides space for 5 to 8 crew and up to 28 passengers, but the cargo space is pressurized to only 3.55 PSI / 0.245 bar allowing for a lighter airframe. A door equipped with pressure bulkhead is located at frame 14, separating the cargo attendant’s compartment from the main cargo compartment. This allows the rear cargo doors to be opened during flight for paratroops and equipment drop. Like the An-12, the aircraft has a circular fuselage section. The An-22 has set a number of payload and payload-to-height world records[citation needed].

The An-22 has the general appearance of an enlarged version of the earlier Antonov An-12 except that it is fitted with a twin tail. This gives the An-22 better engine-out performance, and reduces height restrictions for hangars. Also of note are large anti-flutter masses on the top of each tail.

Soviet 1965 post stamp showcasing the An-22 success at the Paris Air Show.

Only one production variant was built, the standard An-22[clarification needed]. Prototypes, such as the one first featured at the 1965 Paris Air Show had fully glazed noses that lacked the nose mounted radar of production models. Those aircraft had the radar mounted below the right wheel well fairing, forward of the wheels. Antonov designated a variant with a modified electrical system and an additional augmented flight control system the An-22A but the designation was not used by the military.

A proposed civil airliner version capable of seating 724 passengers on upper and lower decks was planned but wasn’t constructed. (For comparison, a typical Boeing 747 can carry 400–500 passengers.