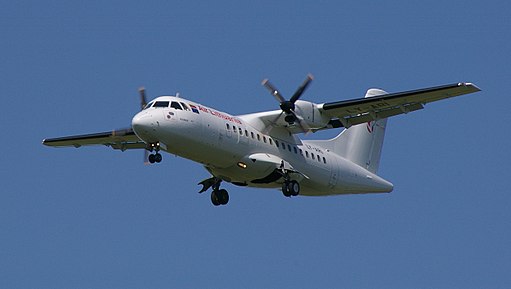 The ATR 42 Cargo is a twin-engined turboprop medium range cargo aircraft capable of transporting 5,380 kg via an internal pallet system. Cargo pallets require a forklift to access its main deck. The ATR 42 Cargo has a “nose heavy” tendency, because of this, no tail stand is provided for this aircraft.

During the 1980s, French aerospace company Aérospatiale and Italian aviation conglomerate Aeritalia merged their separate work upon a new generation of regional aircraft together. For this purpose, a new jointly owned company was established, ATR, for the purpose of developing, manufacturing, and marketing their first airliner, which was later designated as the ATR 42. On 16 August 1984, the first model of the series, designated as the ATR 42–300, performed the type’s maiden flight. Type certification from French and Italian aviation authorities was granted during September 1985, and the aircraft performed its first revenue-earning flight, operated by launch customer Air Littoral, during December of that year.

To date, all of the ATR series have been manufactured at the company’s final assembly line in Toulouse, France; ATR benefits from its sharing of resources and technology with Airbus SE, which has continued to hold a 50 percent stake in the company. Improved models of the aircraft have been introduced, incorporating new avionics such as a glass cockpit, and the adoption of newer engine versions for enhanced performance, such as increased efficiency and reliability along with reductions in operational costs. The aircraft serves as the basis for the larger ATR 72, which was also developed during the late 1980s to complement its smaller sibling. The ATR 42 and ATR 72 have been produced side-by-side for decades.