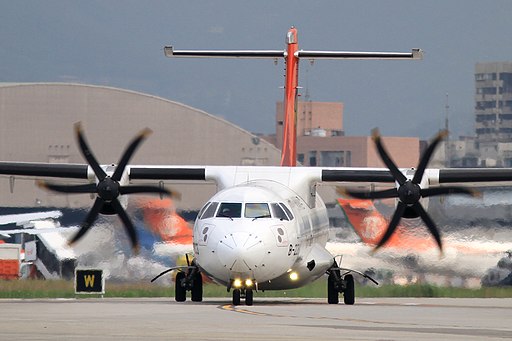 The ATR 72 Cargo is a twin-engined turboprop short range cargo aircraft capable of transporting 8,200 kg via an internal pallet system. Cargo pallets require a forklift to access its main deck.

During the 1980s, French aerospace company Aérospatiale and Italian aviation conglomerate Aeritalia merged their work on a new generation of regional aircraft. For this purpose, a new jointly owned company was established, ATR, for the purpose of developing, manufacturing, and marketing their first airliner, which was later designated as the ATR 42.

On 16 August 1984, the first model of the series, designated as the ATR 42-300, performed the type’s maiden flight. During the mid-1980s, the ATR 72 was developed as a stretched variant of the ATR 42. On 27 October 1989, Finnish airline Finnair became the first airline to operate the type in revenue service. The ATR 72 has also been used as a corporate transport, cargo aircraft, and maritime patrol aircraft[citation needed].

To date, all of the ATR series have been completed at the company’s final assembly line in Toulouse, France; ATR benefits from sharing resources and technology with Airbus SE, which has continued to hold a 50% interest in the company. Successive models of the ATR 72 have been developed. Typical updates have included new avionics, such as a glass cockpit, and the adoption of newer engine versions to deliver enhanced performance, such as increased efficiency and reliability and reductions in operating costs. The aircraft continues to share a high degree of commonality with the smaller ATR 42. The ATR 42 and ATR 72 have been produced side-by-side for decades.

During the mid-1980s, ATR sought to introduce a larger airliner with capacity. This new regional airliner, designated as the ATR 72, was directly developed from the earlier ATR 42 and continued to share many commonalities with it; the principal difference between the two airliners was an increase in the maximum seating capacity from 48 to 78 passengers. This was principally achieved by stretching the fuselage by 4.5 m (15 ft), along with an increase of the wingspan, the use of more powerful engines, and increased fuel capacity by about 10%.

On 15 January 1986, the launch of the stretched ATR 72 programme was announced. On 27 October 1988, the first prototype performed its maiden flight; one year later, on September 25, 1989, the ATR 72 received airworthiness certification from the French Directorate General for Civil Aviation. During the following month, on 27 October 1989, Finnish airline Finnair became the first airline to introduce the aircraft into service.[3] Since the ATR 72 is assembled on the same production line as the smaller ATR 42, along with sharing the majority of subsystems, components, and manufacturing techniques, the two types support each other to remain in production. This factor may have been crucial as, by 2015, the ATR 42 was the only 50-seat regional aircraft that was still being manufactured.