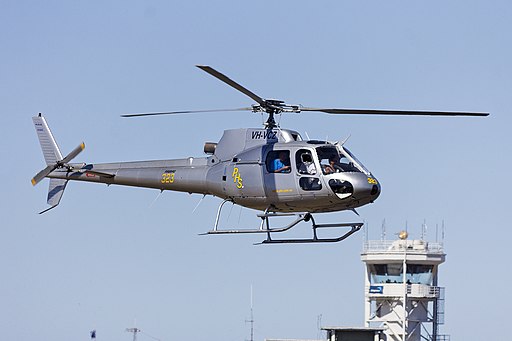 The Eurocopter AS350 Ecureuil A Star is a single-engine light helicopter originally designed and manufactured in France by Aérospatiale (now Airbus Helicopters). The aircraft is capable of transporting up to 5 passengers.

The AS350 was also developed to comply with the noise requirements in place in locations such as national parks; the in-cabin noise levels are such that passengers may also readily converse during flight. The aircraft can also be quickly started up and shut down, which is often useful during emergency medical services roles. It is equipped with hydraulically-assisted flight controls; these controls remain operational, albeit operated with greater physical effort, in the event of a hydraulic failure.

The AS350 has proven popular in a range of roles; multiple cabin configurations can be used, between four and six passengers in a typical seating configuration, and large sliding doors can be fitted to either side of the cabin. In some operators’ fleets, the furnishings of the cabin has been designed to enable the internal space and/or equipment fit-out to be rapidly reconfigured to enable aircraft to be switched between roles. Public service operators, such as those in law enforcement, often have forward looking infrared (FLIR) cameras and other mission systems installed on their aircraft. Other optional equipment on offer to operates had included real-time data links, rescue hoists, underslung cargo hooks, electrical external mirrors, search lights, tactical consoles, night vision goggle-compatibility, moving-map system, internal cabin tie-downs, second battery kit, sand filters, wire strike protection system, 4-channel radio, tail rotor arch, cabin floor windows, and removable seats.

Modern aircraft have refinements beyond those featuring on older models; these changes include dual-channel FADEC-equipped engines, increasing use of digital avionics in the cockpit, decreased maintenance costs, a re-designed cabin, and a comfortable Stylence interior (optional).Older aircraft often undergo refurbishment programs to install aftermarket features, or for the addition of functionality common to newer production aircraft, such as retrofitting of the glass cockpit.