The Antonov AN-124 “Ruslan” is a wide-body quad-engine medium-to-long range cargo aircraft capable of transporting 120,000 kg of mixed freight.

The aircraft fuselage has a double-deck layout. The cockpit, the relief crew compartment and the troop cabin with 88 seats are on the upper deck. The lower deck is the cargo hold.

This aircraft has roll-on, roll-off ramps for cargo fore and aft, an onboard overhead crane capable of lifting up to 30 tonnes of cargo, and items up to 120 tonnes can be winched on board. The aircraft can kneel in a nose-down position to ease loading and unloading operations.

Externally, the AN-124 is similar to the American Lockheed C-5 Galaxy, having a double fuselage to allow for a rear cargo door (on the lower fuselage) that can open in flight without affecting structural integrity. It is slightly shorter, with a slightly greater wingspan, and a 25% larger payload. Instead of the Galaxy’s T-tail, the AN-124 uses a conventional empennage, similar in design to that of the Boeing 747.

The aircraft uses oleo strut suspension for its 24 wheels. The suspension has been calibrated to allow landing on rough terrain and is able to kneel to allow easier front loading.

Pilots have stated that the AN-124 is light on the controls and easy to handle for an aircraft of its size.

Some airports require pavement protection from the heat and blast effects of the An-124’s auxiliary power unit.

Procharter has operated many AN-124 flights carrying a variety of vehicles and outsize cargo. 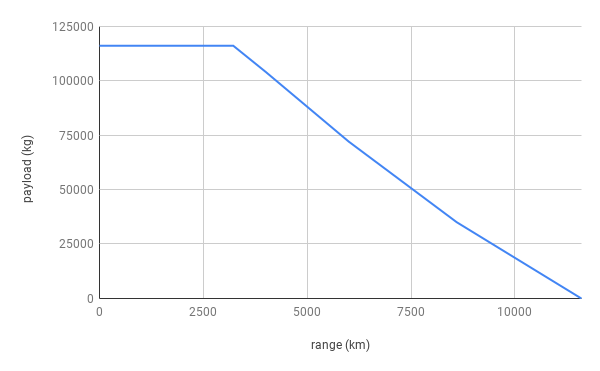