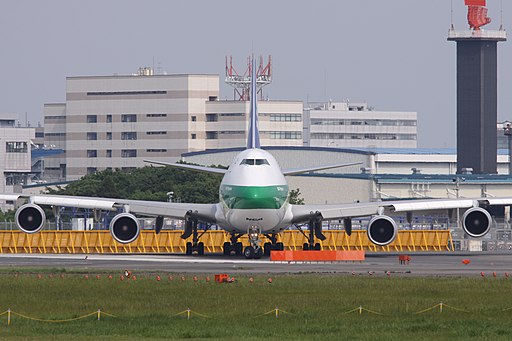 The Boeing B747-400F “Jumbo Jet” is a long haul cargo aircraft capable of transporting 120,200 kg via an internal pallet system. Cargo pallets require a high-loader to access its main deck.

The quadjet 747 uses a double-deck configuration for part of its length and is available in passenger, freighter, and other versions.

Raised above the main deck, the cockpit creates a hump. This raised cockpit allows front loading of cargo on freight variants. The upper deck behind the cockpit provides space for a lounge and/or extra seating. The “stretched upper deck” became available as an alternative on the 747-100B variant and later as standard beginning on the 747-300.

The 747 cockpit roof section also has an escape hatch from which crew can exit during the events of an emergency if they cannot do so through the cabin.

The 747 has redundant structures along with four redundant hydraulic systems and four main landing gears each with four wheels; these provide a good spread of support on the ground and safety in case of tire blow-outs. The main gear are redundant so that landing can be performed on two opposing landing gears if the others are not functioning properly.

The 747 also has split control surfaces and was designed with sophisticated triple-slotted flaps that minimize landing speeds and allow the 747 to use standard-length runways. For transportation of spare engines, the 747 can accommodate a non-functioning fifth-pod engine under the aircraft’s port wing between the inner functioning engine and the fuselage.

The 747-400 is an improved model with increased range. It has wingtip extensions of 6 ft (1.8 m) and winglets of 6 ft (1.8 m), which improve the type’s fuel efficiency by four percent compared to previous 747 versions.The 747-400 introduced a new glass cockpit designed for a flight crew of two instead of three, with a reduction in the number of dials, gauges and knobs from 971 to 365 through the use of electronics. The type also features tail fuel tanks, revised engines, and a new interior. The longer range has been used by some airlines to bypass traditional fuel stops, such as Anchorage.

In March 2007, Boeing announced that it had no plans to produce further passenger versions of the -400. However, orders for 36 -400F and -400ERF freighters were already in place at the time of the announcement.

Procharter has chartered many 747-400F freighters to global destinations.