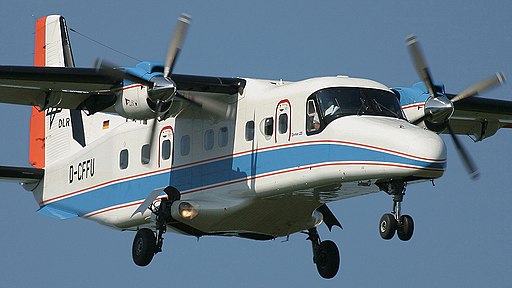 The Fairchild Dornier 228 is a short haul cargo aircraft capable of transporting 5 Euro Pallets with loads up to 1,950 kg. Cargo pallets require a small forklift to access its main deck.

The Dornier 228 is a twin-engine general purpose aircraft, capable of transporting up to 19 passengers or various cargoes. It is powered by a pair of Garrett TPE331 turboprop engines.

The Do 228 is commonly classified as a Short Takeoff and Landing (STOL)-capable aircraft, being capable of operating from rough runways and in hot climates, this capability has been largely attributed to the type’s supercritical wing which generates large amounts of lift at slow speeds.

The Do 228 is typically promoted for its versatility, low operational costs, and a high level of reliability – possessing a dispatch reliability of 99%. RUAG Aviation have claimed that no other aircraft in the same class may carry as much cargo or as many passengers over a comparable distance as fast as the Do 228 NG.

The rectangular shape of the Do 228’s fuselage section and large side-loading doors make it particularly suitable for utility operators, which is a market that Dornier had targeted with the type from the onset.

The structure of the wing is atypical, consisting of a box formed from four integrally-milled alloy panels, while kevlar is used for the ribs, stringers, trailing edge and fowler flaps, the wing’s leading edge is conventional alloy sheet metal.

The Do 228 has been promoted in various capacities, including as a commuter aircraft, a military transporter, cargo hauler, or as a special missions aircraft.