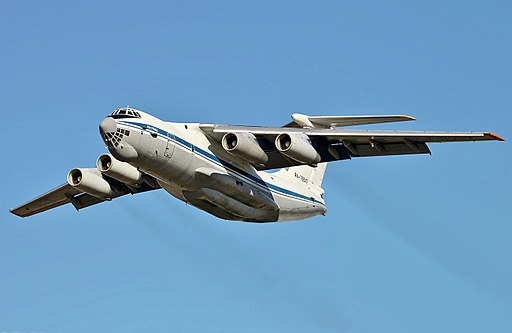 The Ilyushin IL-76T and IL76-TD is a medium haul cargo aircraft capable of transporting 48,000 kg. Cargo pallets require a high-loader to access its main deck.

The aircraft was first conceived by Ilyushin in 1967 to meet a requirement for a freighter able to carry a payload of 40 tons (88,000 lb) over a range of 5,000 km (2,700 nmi; 3,100 mi) in less than six hours, able to operate from short and unprepared airstrips, and capable of coping with the worst weather conditions likely to be experienced in Siberia and the Soviet Union’s Arctic regions. It was intended to replace the Antonov An-12. The Il-76 first flew in March 1971.

The Il-76 has seen extensive service as a commercial freighter for ramp-delivered cargo, especially for outsized or heavy items unable to be otherwise carried. It has also been used as an emergency response transport for civilian evacuations as well as for humanitarian aid and disaster relief around the world. Because of its ability to operate from unpaved runways, it has been useful in undeveloped areas.

The heavy cargo-carrying ramp aircraft, the llyushin-76TD is one the most successful and popular aircraft in the history of air cargo transportation. Its characteristics include its cargo cabin size, carrying capacity, opportunity of autonomous loading without use of special airport equipment and the possibility of using the aircraft at airports with undeveloped infrastructure have remained its key competitive advantages for over 25 years.

A modernized version, the Ilyushin-76TD-90VD has been developed and built. The aircraft is equipped with new PC-90A-76 engines and modern avionics. The new modification of the Ilyushin-76TD-90VD does not have restrictions in terms of flight geography and corresponds to the existing and prospective requirements of ICAO. It is approved for worldwide flight operations.

The aircraft has a tail loading entrance with expanding loading ramps. For loading of substandard cargo, the cabin is equipped with two electric winches of 3 tonnes traction each and 4 electric hoists with a pulling capacity up to 10 tonnes.

Procharter has operated hundreds of charter flights in the Middle East region, transporting vital supplies for its customers.